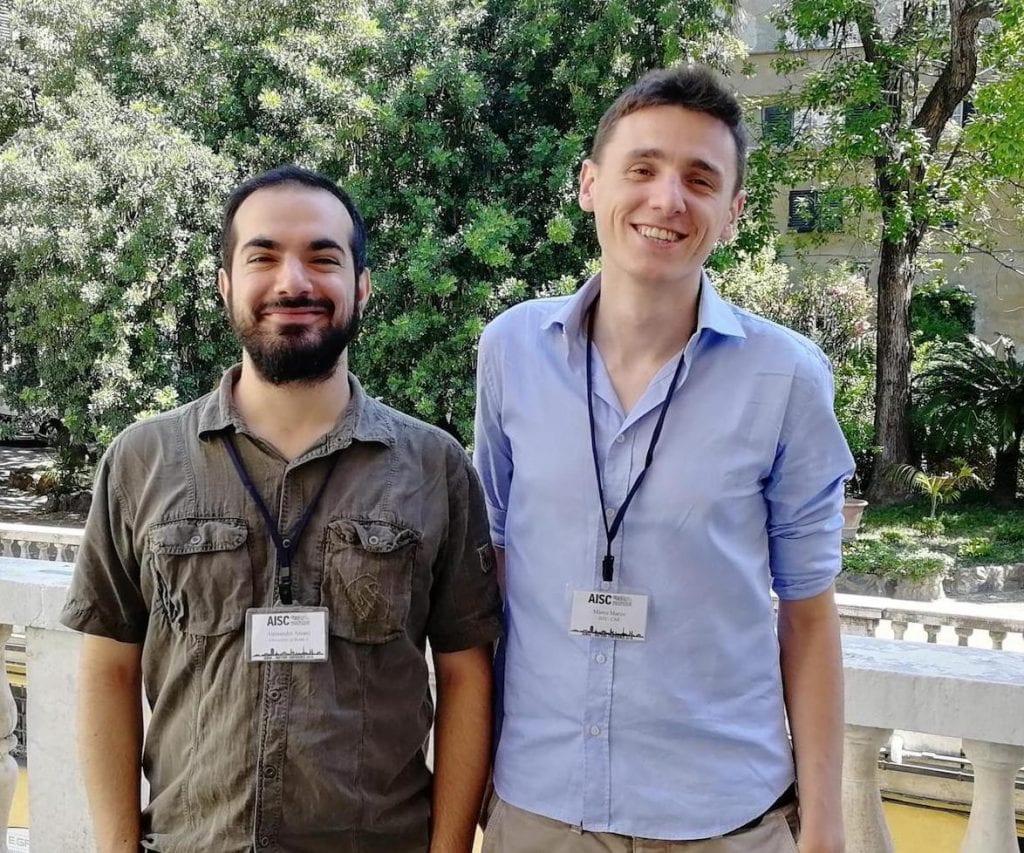 Our February Guest blog highlights two honorary scientists who have collaborated on two of the latest publications powered by iMotions [1] [2].

Alessandro Ansani and Marco Marini are both Ph.D. students from the University of Rome La Sapienza, but they have double affiliations. Alessandro has a research scholarship at Roma Tre University (Department of Philosophy, Communication, and Performing Arts), while Marco works at the Institute of Cognitive Sciences and Technologies (ISTC, CNR). Below, they discuss how their research goes deeper into cognitive psychology, specifically with regard to the interpretation of audiovisuals and decision-making processes.

Tell us about the research institution(s) you work with.

Thanks to a collaboration between ISTC and Roma Tre University, for both mentioned studies, we worked in the Cognition, Social Multimodal Interaction and Communication Laboratory (CoSMIC Lab) at the Department of Philosophy, Communication and Performing Arts (Roma Tre University). As the name suggests, it is a multidisciplinary lab in which several research groups work on diverse topics. In greater detail, Marco is interested in neuroeconomics. He’s studying the cognitive biases that occur during decision-making; Alessandro’s works deepen the complex relationships between soundtracks and narrative visual stimuli.

Two research groups exist within the Cosmic Lab. I’m part of the Cognitive and Social Psychology group (under the direction of prof. Isabella Poggi) that is mainly devoted to the multimodal communication analysis of several agents, among them conductors (gesture and gaze) and tourist guides. More in general, apart from the studies on music and emotions & decision making, our group deepens other themes such as those related to the cognitive and affective aspects of social influence, social emotions, political communication, and fake-news-embracing mechanisms.

My involvement with the Cosmic Lab starts from a collaboration with the Institute of Cognitive Sciences and Technologies (ISTC), where I’m actually working. It carries out research, enhancement and technology transfer and training activities on cognitive, communicative, and linguistic processes: acquisition, processing, deficits, multimodality, and communication technologies.

In the Cosmic Lab we also have a Galvanic Skin Response (GSR) Sensor (Shimmer3 GSR+ Unit) and an Electroencephalogram System. Furthermore, we are starting new projects employing Virtual Reality (Oculus).

Why is the use of biosensors important in your research?

Alessandro: In my field, the assessment of eye tracking metrics and pupillometry in relation to different soundtracks is a relatively unexplored strategy. In studies like the one we’re talking about it is crucial to separate what our participants say they have seen from what they actually were looking at.

The first indication tells us something about what they memorized the most, their focus, the most salient parts of the stimulus; while the second indication reveals a more indirect, and therefore interesting measure. For instance, our participants who listened to an alarming soundtrack declared that they saw a hidden character to a greater extent as opposed to those who listened to a relaxing soundtrack.

Now, it was tempting to state that that particular track increased their attention on the hidden character; but this was simply an unmeasured assumption, as they could have just declared to have seen him without actually seeing him, only because of the fact that the scary track could have fostered false memories and ex-post suppositions. In other words, if you ask me whether I have seen someone who was hidden, and I happened to have listened to a scary soundtrack, I would assume there was someone, even without seeing him. The measurement of gaze direction is essential to disambiguate this aspect.

Marco: In decision making studies, eye tracking can help researchers evaluate the decision-making process by providing additional insight into underlying cognitive mechanisms. In our work, the use of eye tracking allowed us to understand how the addition of irrelevant alternatives influences attention in an apparently irrational way. Moreover, we proved how decision-makers are often prone to letting themselves be guided by perceptual cues of the choice (i.e., salience, similarity) during the decisional process.

Why did you choose iMotions and how has it helped your research?

As our group of research has several interests but shared fundings, we were interested in a platform that could let us assess several measures together; someone proposed iMotions years ago, and even at first glance it seemed like a very promising tool. We have not regretted choosing it! Quite the opposite, we are still convinced that software such as iMotions offers a potentially infinite range of possible experiments to be built.

Most importantly, it encourages a multi-perspective approach to research, which is exactly what we have always been interested in, by favoring the use of several sensors together.

We believe two features to be crucial, the first one being the possibility to merge and synchronize several measures together (GSR and eye tracking, for instance, or EEG and GSR); this would be unbearably hard without a single software.

The second characteristic is the possibility to conceive and realize very complex experiments without a deep knowledge of programming languages. Unfortunately, some labs are not solidly backed up by engineers or computer scientists, so they have the necessity to work with something as similar to a point and click as possible, without compromising on the quality of evidence, experimental accuracy, and scientific rigor.

How do you think your research has changed compared to how it was before?

It’s actually hard for us to think about a “before”, as we both are starting our careers as young researchers. Nevertheless, we are fully aware that the past years’ experiments such as ours would have been quite out of reach for many skilled researchers. On the contrary, nowadays, thanks to technology, even young and therefore inexperienced researchers, such as we are, have great possibilities, a wide number of amazing tools, and the concrete chance to strongly prove theories beyond any reasonable doubt and by means of technological systems never imagined before.

We would like to thank Marco Marini and Alessandro Ansani for taking the time to share their research project and story. We look forward to following their contributions to the scientific community in the years to come.

I currently work as a research assistant at the CoSMIC Lab (Roma Tre University) while I attend the Ph.D program of Psychology & Cognitive Science at Sapienza University of Rome with a project about the influence of soundtracks on the interpretation of audiovisuals in terms of several psychological constructs; among which empathy, attributed emotions, impressions of personality, plot anticipations, and environment perception. I’m always interested in too many different topics; my other fields of research involve psychology of music, moral psychology, and body language from a lexicological perspective.

I am a Ph.D. student at the University of Rome La Sapienza, and I work with the institute of cognitive sciences and technologies of CNR (Italian National Research Council) and the Nudge Unit of Rome Municipality. I’m mainly interested in investigating the cognitive biases during multi-alternative and multi-attribute decision-making, but I’m also currently working on the neuro-cognitive processes, the response strategies, and the systematic biases underlying human decision-making. I am also interested in intertemporal and probabilistic decision-making, and I’m collaborating on a project about nudge theory and tax evasion together with the behavioral economics department of Rome Municipality.