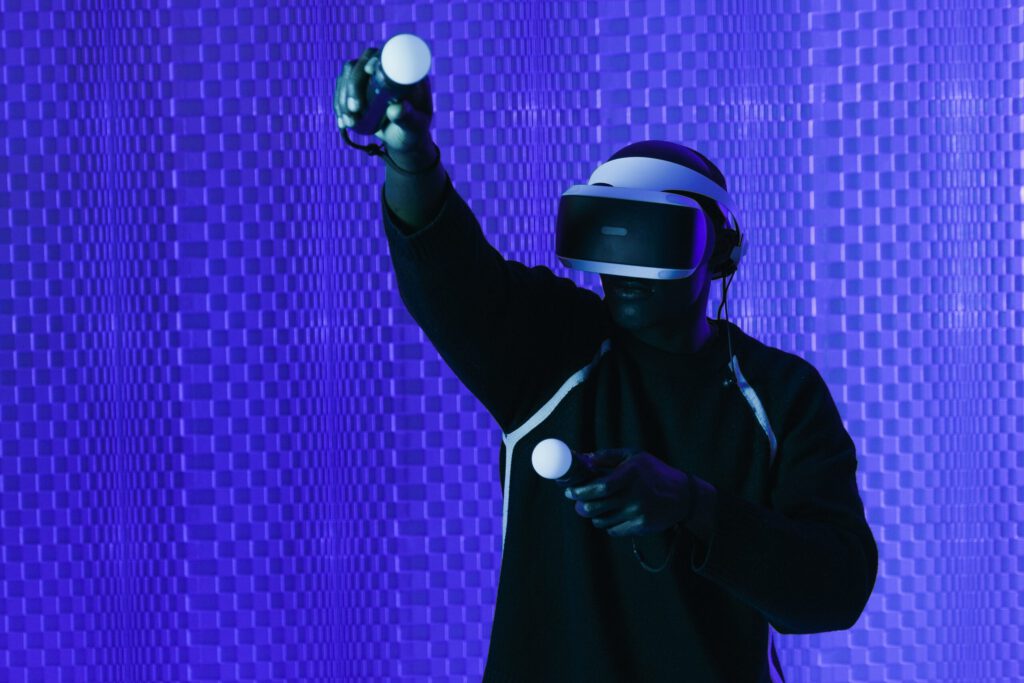 Virtual reality (VR) is changing the world of work and research from the ground up. Offering unprecedented opportunities for improving the performance of individuals, both industry and academia have begun to explore how this technology can shape the landscape of training across a wide range of domains.

We’re continuing on from our previous post covering training in VR, and will discuss below more examples of how humans can learn better in new, immersive digital environments.

One of the biggest industries interested in employing the use of VR to help with training is the military. There is of course a clear advantage to this – initial training of individuals to be in combat can occur with a degree of realism, without putting them in a dangerous environment.

A collaboration between several Italian institutes examined the potential benefits of using VR for stress management in a military context [1]. The investigators reviewed 14 studies that had used VR for stress management training, ultimately concluding “that virtual reality can provide interactive Stress Management Training to decrease levels of perceived stress and negative affect in military personnel”.

The review examined studies that covered a range of environments, from a virtual island that encouraged breathing practices, to calming environments, to a virtual jogging path that trained relaxation. Each study found that the participants became better at regulating and experiencing their stress levels, suggesting that the use of these environments could have applications beyond military contexts.

Beyond regulating and experiencing emotions, military applications of VR also cover combat training, medical training, and simulations of vehicles (the latter of which we’ve covered in a previous blog post).

Researchers from the University of Nebraska, Adaptive Cognitive Systems, University of Central Florida and Penn State University explored how VR could help in the acquisition and retention of skills used within a combat context [2].

As the authors state, there is a “need to train 100,000 military health care personnel annually” – any technology that can help reduce the amount of work required to carry out such training, while still delivering satisfactory results, could have a substantial impact on the economics of military training.

The researchers focus on the retention and reacquisition of surgical skills of combat medics. By introducing (and reintroducing) motoric tasks within a virtual environment to participants, the researchers were able to test how the performance of combat medics compared to those who did not undergo such training. Within the study, the participants were also tested for their muscle activity using EMG while in the VR environment.

The researchers conclude that the VR training “could measure medical skills in military medical personnel, minimize errors, schedule training, and potentially control the duration and expense of military medical training”.

The combined use of EMG signals also allowed the authors to state that the study “confirms that the muscle activation required for the task was decreasing, and thus the procedural aspects of the task were becoming simpler”. Pointing towards the benefits of using a multimodal approach while exploring the potential advantages of VR training.

In the context of direct combat, researchers have also looked at the possibility of using VR for live firing training [3]. With the use of “invisible laser infrared technology, 1:1 real-scale rifle guns with recoil effects, as well as 3D interactive virtual reality” the possibility of developing a cost-effective solution for military training was explored.

The study found that “learning outcomes, learning motivation and final performance, when utilizing the innovative 3D interactive virtual system, were better than those in traditional live firing training”. Suggesting that a cost-effective and scalable approach using VR may be the way forwards for improving training and performance in military contexts.

Within the world of work, but outside of a military environment, VR has been increasingly used to provide scalable training for large corporations, and for organisations that need to train their employees to work in potentially dangerous environments.

Examples of workplace training are found in a variety of environments (beyond surgery training mentioned in part 1 of this post series), from construction [4], to welding [5], to aircraft maintenance [6], and even with mining [7, 8].

One example of this scalability in training with VR comes from the manufacturing industry, in which employees often have to quickly complete sequential tasks with a high degree of precision. Additionally, delays or imprecise work can cause the production chain to be stalled, making a high level of performance paramount to an efficient output.

Researchers from the National Technical University of Athens explored the use case of VR training within an aerospace materials production environment [9]. The training of workers building composite aerospace parts in cooperation with robots was carried out in VR to test both the principles and performance of the virtual environment, to ultimately test if the training could have real-world applications.

The researchers examined how participants both felt and performed in the training task, finding that the fidelity of the environment was maintained (that is, the participants mostly felt immersed within the task), and that the participants reported increased motivation to carry out the tasks. As the researchers state: “Overall, testing results are positive and suggest a good prospect in the use of such applications for H–R [human-robot] collaboration simulation or acceptability testing”.

Whether the findings of this research are more broadly applicable to training within VR remains to be shown, yet other research also reports positive findings [4, 5, 6, 7]. The strength of the findings could be further supported by the use of quantitative data, such as the location of the eyes through eye tracking to monitor attention in the virtual environment compared to real-world attention, or electrodermal activity (EDA / GSR) activity to monitor levels of physiological arousal in normal and virtual environments to examine differences that can be related to feelings of immersion.

A particular advantage of virtual environments is the possibility to put individuals in environments that would be dangerous if experienced in the real-world. One example of such a scenario is with power line engineers – individuals who are required to interact with and maintain electrical power lines. Mistakes made in the interaction with such power lines could ultimately prove to be fatal, so the onus is on increasing safety through training. Researchers have deployed virtual learning environments in order to test the effectiveness of such training [10, 11].

One study, in particular, found that the system was “a cost-effective tool for transferring skills and knowledge to new workers while reducing the time and money invested in their training” [10]. Both of these findings add further to the support of using this tool to enhance (and decrease the cost of) training in VR.

The research (as with many other examples previously mentioned in these posts), could benefit from utilizing biosensors in order to capture more data about the learning process. Being able to collect data about, for example, someone’s level of physiological arousal, or cognitive load, could point toward moments in which accidents are more likely to happen. Data of this kind can help add a new layer of understanding to the processes involved in learning and help develop training further.

VR can clearly be used in a broad variety of contexts to help train and improve the performance of individuals in domains that are experienced in real life. It presents a more cost-effective, and potentially more motivating platform (through, for example, the gamification of work).

Further to this, and perhaps most importantly, it’s possible to collect detailed information about an individual’s actions within VR, helping provide not only a better understanding of what is learned, but also how. Knowing what is looked at when, or how a participant’s physiological arousal changes throughout training can provide the basis for understanding what does and doesn’t work in each environment. This information can also be used to guide the improvement of the training programs themselves.

Ultimately, there are a huge breadth of possibilities when it comes to using VR for training and performance improvement. The potential is only limited by what happens in the real world.